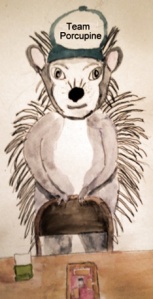 The grand slam force is very useful in grand slam bidding. It asks partner to bid seven of the agreed suit if partner holds two of the top three honors in the suit. Otherwise, only six should be bid. It is rather important, however, that the partners have agreed on a suit.

In the auction, 2NT showed 21-22 HCP and a balanced hand. Three hearts was a transfer, and four diamonds showed a second suit and an interest in slam. Everything was understandable up to this point. Then Kowalski bid four hearts, which in his mind showed support for both diamonds and spades and was a cue bid of the ace of hearts. Nograwowicz was not certain if Kowalski actually had support for one of his suits and he rebid diamonds to confirm five of them.

Now Kowalski was certain there was a slam and bid 5NT. He intended this to be the grand slam force. However, Nograwowicz thought his partner must be 2-2 in his suits and that Kowalski was simply trying to bail. He was thoroughly confused and for once in his bridge career, did not know what to do. He then passed, making the awkward 5NT the final contract.

Kowalski was shaken when he saw the dummy. He realized all he had to do was find the queen of spades or the queen of diamonds and a small slam could be claimed. West’s ten of clubs was covered by the jack and queen, declarer winning the ace. Kowalski led the king of diamonds, then the eight, as West discarded a club, and dummy’s ace took the trick. Kowalski had seen Nograwowicz play so many hands, that he now knew what to do. He had to keep East off lead because a club lead from West was safe, while one from East would cause him much distress.

He then played a small spade to the jack when East followed low. This held and things were looking up for Kowalski. He cashed the ace of spades, seeing that this suit was splitting 3-2, then conceded a diamond to East’s queen. He soon had twelve tricks lined up in front of him. However, he was extremely depressed since he knew he had been responsible for missing an easy slam.

But Pas and Konejwicz came back to the table with good news. Their opponent had been in six spades and had not needed to keep East off lead. This declarer guessed spades wrong, losing a trick to East’s queen. Then that same declarer had played for the drop in diamonds, also giving East a trick with the queen. So Team Porcupine had actually picked up 13 imps on this hand

The porcupines went on to win this match by 8 imps and later gave Kowalski’s bid a nickname: