Riding High with the Nine of Diamonds 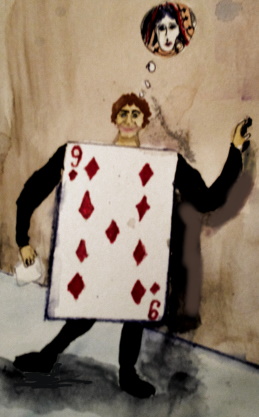 Riding High with the Nine of Diamonds

Intermediate Place was jumping the other night.  The Nine of Diamonds was buying drinks for all the tens, eights, and other nines.  It all came about as a result of the following hand:

“Well,” the Nine of Diamonds said as he sipped on an amber ale, “Ms. South, my mistress, probably should have taken the money and doubled East’s annoying 5♦ bid.  But she chose to go for the small slam instead.  Indeed, I liked her choice.”  The other Intermediates cheered the Nine’s bold words.

“West led the king of diamonds, taken by Ms. South’s ace.”  The little pasteboards hovered around the diagram of the hand the Nine of Diamonds had drawn on a cocktail napkin.  “Then she drew trumps in two rounds, ending in dummy.”

“I could see she was puzzled as to what to do next.  I tried to give her a clue by making my diamonds glitter in the artificial light of the studio.  She must have noticed, as a small smile played around her face.  I have always liked Ms. South.  She has a pleasant personality, with a kind word for everyone and I really wanted her to have success on this hand.  It pleased me when she took notice of me.  Her partner, Mr. North, had barely acknowledged my existence when he sorted his cards.”

The other Intermediates looked at each other knowingly.  They had all been in a similar position at one time or another.

“So, Ms. South played her ace of hearts, then a heart to the king as West showed out.  Now it was time for the key play of the hand.”   The other Intermediates drew in their breath as they waited for the Nine’s next words.

“She played me!  And she threw a heart on me.”  The tens, nines, and eights gasped.  The little Eight of Clubs even giggled.

“West won, but what was he to do?  If he played a diamond, Ms. South would sluff a spade from dummy and cross ruff the rest of the hand.  Eventually, he led the ten of spades.  But this wasn’t good enough.  Dummy’s queen won and Ms. South soon claimed this magnificent slam.  And all because of me!”

The cheers in the club were deafening, and the party continued until the wee hours of the morning.  When the Nine of Diamonds was good and tipsy, he wondered if he should approach the Queen of Spades when he worked washing dishes at the Royal Honors Club. He could bring up her role in this hand and maybe ask her out on a date.  Now that would be a bold move!