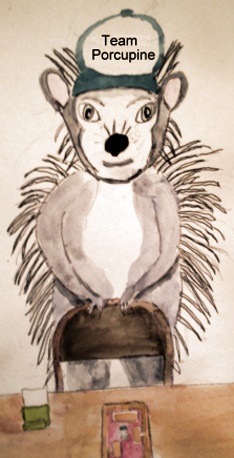 Part IV: The Two Heads of Fate, Board 18

Bridge matches, even at the highest level, are not always decided by the amount of skill found in the competing players. Many times it seems as though some outside force, such as fate or luck, is playing an important role in the result. It may never be known for certain just what forces contributed to the outcome of board 18 in the match between Team Porcupine and the Silver Crusaders. But at least one of the players would forever believe that there was an extra, unseen participant on the scene to guide this hand to its ultimate resolution.

Readers can see the diagram of the auction above. However, a mere look at the diagram does no justice to the drama that was taking place in the players’ minds while the bidding unfolded. The following account is based on interviews that took place several years after the events being described in this series of blogs. While Diego, Kowalski, and Nograwowicz still had clear memories of this day, the Silver Fox had unfortunately passed away at the time of the other interviews. The references to him are based on his unpublished and unfinished memoirs, The Silver Fox at the Table, which his niece, Vivavia V. Vixen, allowed this writer to consult.

Diego alerted the Fox’s opening bid of 4NT. When queried as to its meaning, Diego replied, “Sí, amigo, this is the cruel and unusual no trump. It is highly unusual, of course. The Fox has a long, unknown suit. And, sí, it is cruel in the effect it normally has on the Fox’s opponents.”

Nograwowicz thought the explanation over and bid 5♦.

Diego was not to be outdone and contributed 5♠.

Kowalski decided he needed to introduce his suit, hearts, and did so.

The Fox finally revealed his mystery suit, clubs, now no longer a mystery to the other three players, at the seven level.

Nograwowicz felt that if Kowalski could bid hearts at the six level, then his holding of ace doubleton in that suit made it mandatory to raise partner to 7♥. Diego shrugged and passed, as did Kowalski, but the Fox was not done yet. He had too much faith in Nograwowicz to take a chance that 7H might make and put the 7♠ card on the table.

Nograwowicz doubled the Fox’s bid, mainly out of frustration, and Diego calmly passed. It was now up to Kowalski, who hated making high level decisions. On the one hand, it seemed logical to him that since Nograwowicz had bid 7♥, he must hold the aces in the suits the opponents were bidding. Or did he?

Sweat flowed down Kowalski’s face like a river approaching a steep waterfall. After much thought and wiping his brow until his handkerchief was drenched, Kowalski realized he was completely incapable of making such an important decision by himself. He decided his only hope was to leave the matter to Fate.

He reached in his pocket and found a coin. He grasped it and raised it to table level. He slowly opened his eyes and saw that there was definitely a head staring back at him.

He confidently put the 7NT card on the table.

“I don’t why I’m on opening lead,” the Fox said. “I should be declarer. After all, I opened no trump first.” He tossed the king of clubs down.

Kowalski’s heart skipped a beat as he waited for dummy. Ah, Nograwowicz did have the missing aces. Kowalski tested hearts and diamonds and soon claimed 16 tricks, three more than he needed. This was plus 2220 for Team Porcupine.

Nograwowicz wanted to see the coin Kowalski had used. When his partner handed it to him, he saw it was a Canadian quarter, not the USA variety.

“Stanislaus, did you know this was a Canadian coin?”

“The nationality of the coin played no role in Fate’s decision, I’m sure.”

“Perhaps, but which side did you see? The head of Queen Elizabeth or the moose head? Because if you saw the moose, then Canadians consider that side tails. So which was it and what did you call?”

Kowalski realized he had once again made a mistake. He had called heads, but actually seen the moose. Still, this did nothing to shake his faith in Fate. It only convinced him that Fate worked in mysterious ways.

“I saw Queen Elizabeth’s lovely head,” he said, “and I called heads. So Fate guided me to the perfect decision.”

“Humph,” said the Fox, who had actually seen Kowalski looking at the moose head. “Perhaps you should change the title of your book to Precision Moosehead.”   The Fox looked at his partner, Diego. “The 4NT bid is obviously not cruel and unusual enough,” he said, malevolently twirling a lock of silver hair, “I should change it to 5NT or maybe even 6NT.”

Pas and Konejwicz went into that good night much more quietly than did the Fox and Diego. Joe soon reached 7♥. Konejwicz led the king of clubs and Joe also looked worried when he first saw the dummy. But when the red suits broke in his favor, he soon claimed thirteen tricks for plus 2210 for the Silver Crusaders. Thus, this board was absolutely no swing in spite of all the bidding drama. However, Nograwowicz later calculated that 7♠ doubled would most likely have been down no more than seven, for plus 1700 for Team Porcupine. This would have been an 11 imp loss for Team Porcupine. Thus, Kowalski’s brush with Fate had saved the team from a big deficit.